We have a few favourite restaurants in Discovery Bay and one of them is the First Korean. As the name implies, a Korean restaurant. It’s on the first floor, but there’s no view to enjoy, as it’s covered in dark wood. But don’t get me wrong, it is not unattractive – just very dark, with lots of wood. Whenever we go there, we order a mix of dishes making sure to include a pancake and a BBQ dish, and if we really feel hungry, we order a rice dish like bibim bap too.

This time we opted for BBQ, and we sat opposite each other at a table with a hot grill between us. We opted for the mixed meat platter, which included pork, chicken, beef and some ribs. It comes in a set, with a hot broth soup, white rice and different appetizers. As we also ordered a seafood pancake in a set, we received more appetizers and shared six different ones between us. 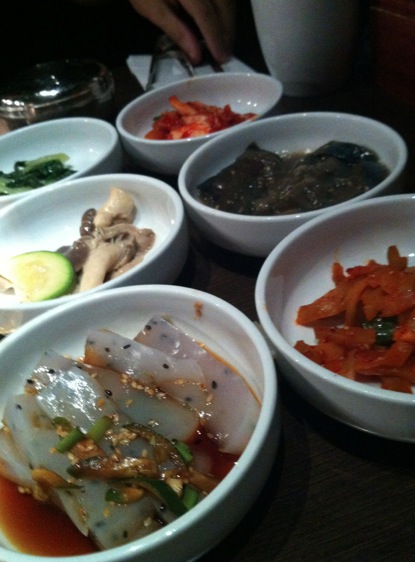 The appetizers are a mix of pickled and spicy ones. We had the typical kimchi cabbage, pickled beansprouts and mushrooms, spinach, more spicy cucumber and a white rice cake dish that came with black sesame seeds. The appetizers all tasted yummy and we ate all of them.

We grilled the meat in small portions and it tasted nice – some of the chicken was cut into very thick pieces, so we had to keep it on the grill for a long time to make sure it was cooked properly.

This meant some pieces were a little burned at the corners, but apart from that it was fine. The beef was nice and lean and also the pork was fine, maybe a little dry – but probably our fault as we did ensure it was well-done before we plunged it into the soy/vinegar sauce mix before eating it.

The seafood pancake is ok – it really depends. Some times it has been already prepared and kept warm, and you can tell that it is a bit too crispy. Other times they made it fresh and were in a rush, so the dough can be a little too soft. It is a little hit and miss, but I’ve not had any really bad ones that I had to send back to the kitchen, so all fine. I just wonder why sometimes I get three small pancakes served on a hot griddle and other times one big one in a wooden basket (the latter is the more traditional way) – maybe different cooks on different days?

The food always is plenty, especially with the soup and rice, and we finished the meat, the seafood pancake and the appetizers, but left some of the rice and soup. It was way too much for the two of us, but it was tasty and good quality. The BBQ sets start from 120 HKD, so it is very reasonable – but of course, you can opt for more expensive platters and they can set you back 240 HKD or more. We’ve never had desserts and I don’t even know if they serve any.

Service is ok – they are very friendly but at busy times (especially during weekends) it can take some time till they take your order. But food arrives quickly and that’s all that matters. We’ve had a few encounters with staff that don’t speak much English, but they always refer to their boss (at least that’s what I believe he is) and he comes and answers our questions. I’ve been to other Korean places in Hong Kong and so far this is one of the better ones – so we’ll be back again.