When I took those pictures and looked at them afterwards, I was convinced they would be about a post on clouds, given the blue sky and reflections. But actually, the more I look at those pictures, the more the architecture of the Bank of China stands out to me.

Of course, clouds is one part of the story – the picture was taken last Thursday, a blue-sky day with lots of sunshine. This has changed again. We are in monsoon season and we’ve had clouds, thunderstorms and a typhoon passing closely to Hong Kong in the last hours. But let me not distract from this blog post. It’s time to write a little about this fantastic building, which I tend to call the ‘Toblerone’ building of Hong Kong, giving its triangular structure. 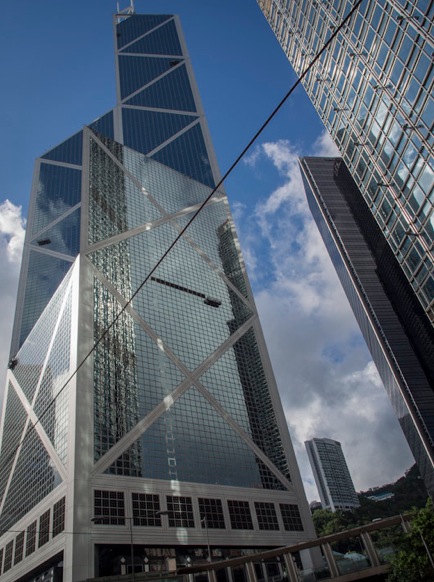 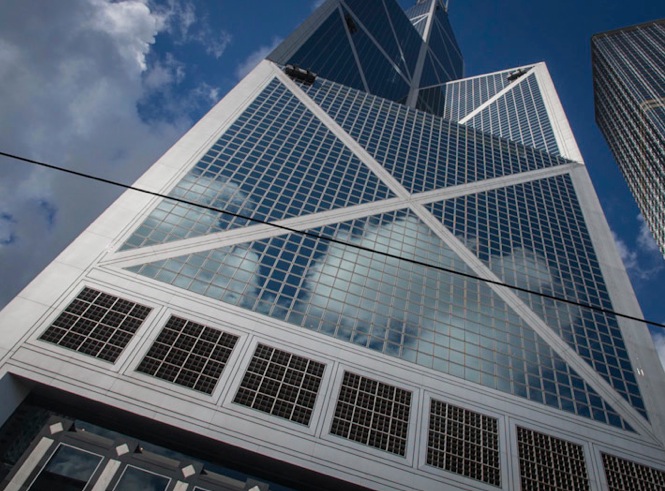 The building is designed be the star architect Ieoh Ming Pei (he’s famous for the glass and steel pyramid in front of the Louvre) and stands 315 metres tall (with the two masts it’s 367.4 metres). It was the tallest building in Hong Kong and Asia from 1989 to 1992, and it was the first building outside the United States to break the 305 metres mark. It is now the fourth tallest skyscraper in Hong Kong, after International Commerce Centre, Two International Finance Centre and Central Plaza.

It is beautiful in day time. The glass, which comprise the building exterior, reflects the light and its surroundings making it seem like the building is either a giant mirror or a shiny white crystal (or a diamond, as I. M. Pei describes it).

It is even more striking at night time. The LED lights are bright and strong and offset against the dark glass at night. The whole building seems to blend into the night and just the corners are visible, showing off the striking architecture even more clearly at night.

While doing some research about this building, I learnt some interesting facts: