St. Joseph’s Cathedral resembles Notre Dame de Paris – of course, once you look around the cathedral there are lots of small shops, markets and streets that look like anything else than shops, markets and streets you would find in Europe! You are in Asia, in Hanoi, so there are lots of fresh food stalls, coffee shops selling iced coffee with condensed milk (more about that in a future post), boutiques with colorful scarves or souvenirs such as chop sticks.

But the church looks really French… and that’s because it is one of the first structures built by the French colonial government in Indochina when it opened in December 1886. It is the oldest church in Hanoi and it is still in use today – on Easter Sunday the main gates were open and mass goers spilled out on the street. On other days, you have to enter and exit through the side doors. It is a magnificent building, no doubt – but so out of place if you look at the typical houses of the Old Quarter.

The Old Quarter has the original street layout and architecture of old Hanoi. At the beginning of the 20th century the city consisted of only about 36 streets, most of which are now part of the old quarter. Each street then had merchants and households specialised in a particular trade, such as silk traders, jewellery, bamboo makers, blacksmiths etc. Here is the last remaining blacksmith of Hanoi:

The street names nowadays still reflect these specializations, although few of them remain exclusively in their original commerce. 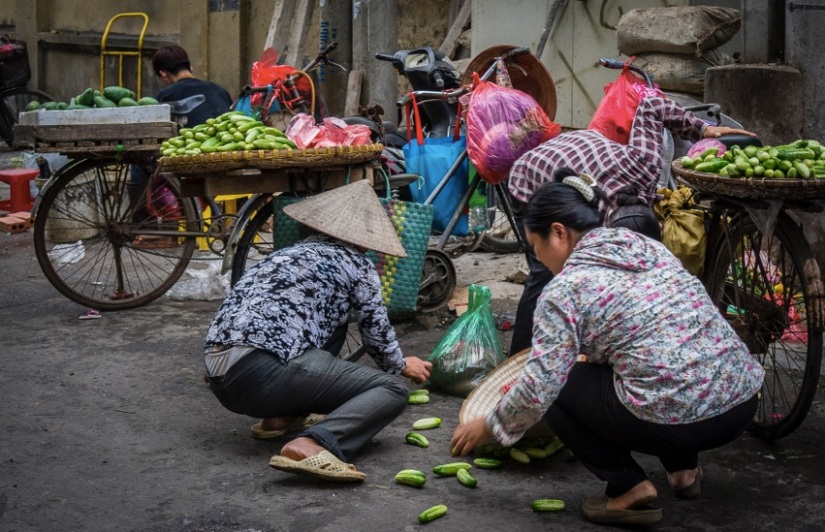 Finally, as you can see there are always small restaurants (with tiny chairs and tiny tables) plus street vendors, bicycles and motor scooters… it’s busy in Hanoi!