Like every other baby, Lina loves music and we sing and dance every day. So when I saw posters announcing a special concert just for babies, ‘Good Music for Babies’ by the Hong Kong Sinfonietta, I immediately went ahead and bought tickets for Friday January 29 at 11am. The tickets for the weekend concert had already sold out.

I was curious what would await us – I only knew that we had to be at the Theatre of the Hong Kong City Hall, but I had no idea what music would be played and what to expect. We arrived a few minutes before the start and were shown our seats. Lina had to have her own seat (and ticket) and she also got a booster seat so she could sit higher – but of course, a 1-year old does not want to sit on her own seat, so she climbed on to my lap.

The orchestra was already on stage, which was nicely decorated with large-scale origami items, such as a clock, a tortoise and bull heads – these were made specially for the concert, to fit with the programme. The conductor entered and she introduced herself, the orchestra and the programme for today’s concert.

I got a little worried when she already started saying that the kids have to stay seated (tell that a 1-year old) and that if a kid cries we have to leave the room and wait outside. It sounded very harsh and not quite suitable for a concert that is labelled ‘Good Music for Babies’. But anyway, I thought, let’s just start and see how it goes. 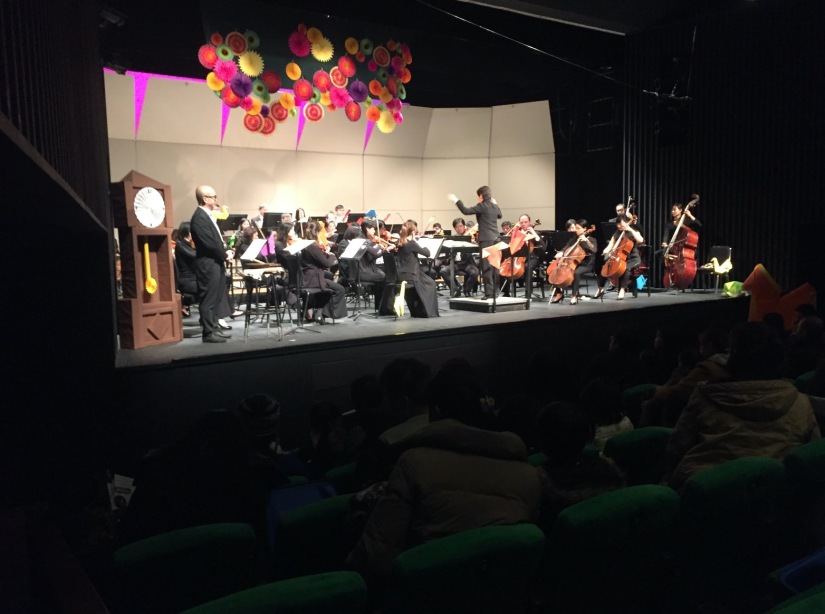 The first piece was ‘Les Toreadors’ from Carmen by Bizet and as soon as the music started, Lina was mesmerised, she could not believe where the sound was coming from. She noticed that the origami bull heads moved up and down, but she was much more interested in the movement of the violin players, the sound the big drum made and just what was happening on stage.

Of course, as soon as we moved to the more quieter, relaxing, second piece ‘Holbert Suite’ by Grieg, Lina’s attention moved on to something else too – she discovered the programme and wanted to turn the pages. By the third piece (Tales of Hoffmann’ by Offenbach, Lina was crawling on the floor. It was hard to keep her in one place and I was surprised to see that most of the other kids (granted, they looked older) sat still next to their parent(s) or guardians, and watched the concert quietly.

Lina was not having any of that, she wanted to move and dance. ‘The Moldau’ by Smetana kept her interested for as long she could climb the stairs up and down, and when the ‘Tortoise’ of the Carnival of the Animals by Saint-Saens started, we went up to the back so she could move around without disturbing any one.

That’s where we stayed for the next songs. When the ‘Can Can’ by Offenbach was played, the conductor finally encouraged the kids to stand up and move a little (but of course, stay in or close to their seat) and when the clock ticked (‘The Syncopated Clock’ by Leroy Anderson) she asked everyone to move their arms in one and then the other direction, like the swinging of a clock.

It was fun to watch the older kids looking for the bumblebees (‘The Flight of the Bumblebee’ by Rimsky-Korsakov) but I don’t think Lina understood what this piece was all about. She enjoyed the ‘Light Cavalry’ by Suppe much more, as all kids were asked to bounce up and down and ride a horse.

Overall it was an enjoyable hour – but I really would have hoped that a concert for babies would mean that the toddlers could move around and experience the music better, rather than having to sit still for an hour. Of course, everyone was relaxed and very welcoming – no one said ‘shhh’ to Lina while she was singing, but I still felt that a concert-style seating for babies around 10-18 months is tough.

I understand that the toddlers need to learn what a concert is and how to behave, but for their first encounter of ‘live’ music I would prefer if the setting would be slightly more relaxed and there would have been an area where the toddlers could roam around. Anyway, that’s just my take on it – overall I am very happy that concerts like this take place and that I can bring my little one along.