I was kind of contemplating whether to write about Godenya again – normally I only write once about a restaurant and then that’s it – usually because I either don’t go back there or I eat there a lot. But this time I am torn. I have been to Godenya in February, and I totally loved it.

Now I have been back in April and I feel cheated – it is still the same little restaurant with a fantastic sake master and great cook, but somehow the menu was underwhelming and some of the sake pairings just did not work for me.

As a first dish we had ark shell and heart clam, with a Miyoshigiku (Tokushima) sake at 10 degrees. The sake was surprisingly fruity, I could taste the pineapple on my tongue. The dish was refreshing and interesting, together with the sake it shouted: ‘this is going to be an unusual menu tonight’.

Next up was an oyster cut into tiny pieces, wrapped in cherry leaves and with sakura shrimp. It was served with a Chotin (Aichi) sake at 18 degrees. Now this is where everything went a little bit funny. I loved the different textures of crunchy shrimp and the soft oyster, but the flavours were very stark and contrasting, almost too strong and not in balance. 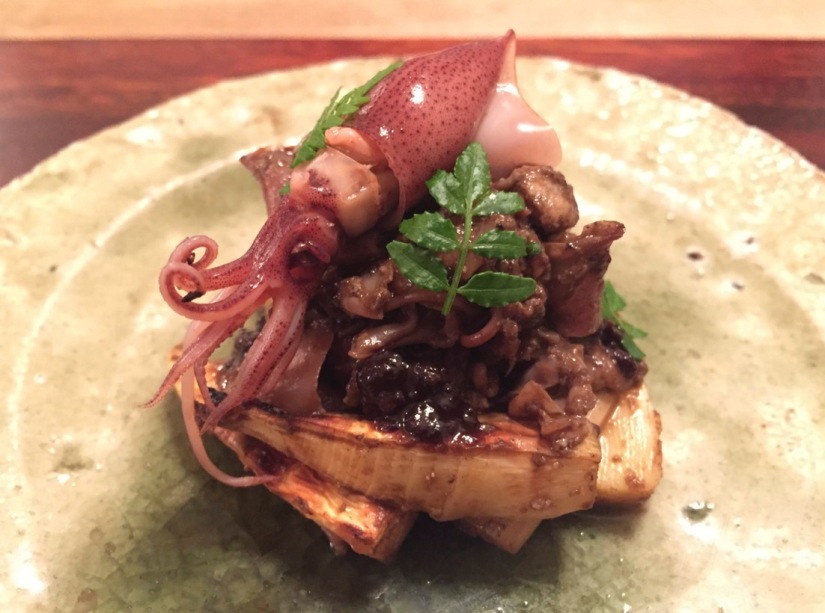 The firefly squid and bamboo shoots dish with fermented black beans sauce was the lowlight of the evening, at least in my opinion. Not even the Sougen (Ishikawa) sake at 43 degrees could help me to get rid of the weird, stale, inky taste in my mouth. I did not like the squid intestines and it did not help that the bamboo shoots were too hard and crunchy. I sent half of my dish back into the kitchen, it was not something I enjoyed eating.

Then we had a steamed Spanish mackerel with a Suwaizumi (Tottori) sake at 22 degrees. Finally a good dish, nicely balanced with a good flavour combination that was not too overpowering – I could still taste the fish as well as the vegetables.

The fifth course was a chicken and century egg combination with truffle sauce. Beautifully presented, a Japanese-Chinese fusion dish, but again with very strong flavours that tried too hard to compete with each other. The Tomita (Tottori) sake at 48 degrees hat no chance to come through this combination, I could not taste the flavours.

A grilled langoustine was delicious and so was its broth – probably the highlight of the evening. It was heart-and-soul warming comfort food at a very high quality level. What a shame that the portion was small, and that the glass of Yorokobigaijin (Kagawa) sake at 17 degrees was empty too quickly too. 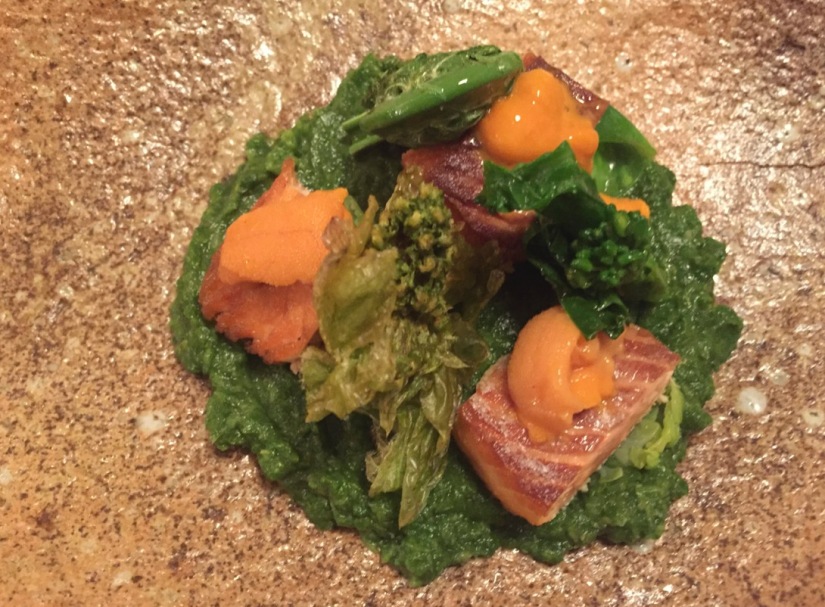 The grilled cherry salmon was overcooked and dry, and the butterbur sprout is such a bitter vegetable that I found this was a big mistake to combine it with the salmon. Not even the Shinkame (Saitama) sake at 52 degrees could help me to overcome the bitter taste – and given that we had been waiting quite some time for the dish to arrive (the menu started of quickly with courses following every few minutes, but between the squid and mackerel the pauses became longer and longer) it was a disappointment.

Finally, the Chinese almond creme brulee was nice – I loved the crust on top – but then, it was and is a Japanese restaurant … so maybe some matcha or other Japanese ingredient would have been better? Maybe I am too harsh, maybe I had too high expectations. Who knows?!

Interestingly a friend of mine tried the same menu (he was a first-time eater at Godenya) and we shared similar thoughts. The menu was trying to be too creative for its own good. Not many dishes worked – let alone the sake and food pairings, the individual ingredients seemed to be too overpowering and competing.

Would I come back? NO – not for this menu. I will wait a few months and maybe revisit – it was a GREAT first time experience, but a not so great second experience. So I guess it is time to try out other places first, before going back to Godenya.