We love to go to Stanley on the weekend – we usually go there in the afternoon, take the kids and just stroll down the water promenade. 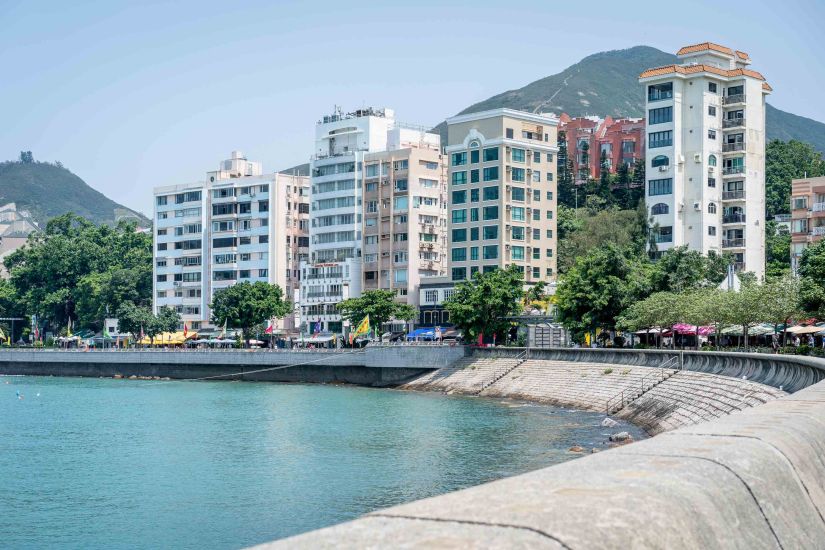 We start by walking through the market, but usually we do not buy anything (except if we are looking for Chinese New Year costumes for the kids) and then we walk past the Shui Sin Temple, along the Stanley Promenade.

Sometimes the kids take their scooters and bikes along, and this is one of the few places in Hong Kong, where they can actually ride them. We just have to be careful, there are many people, kids and dogs out on the Promenade too, so we keep our eyes open and try to stop any accidents from happening!

There are often street performers or street vendors selling bubbles, so the kids watch them or other kids who are playing with balloons and bubbles.

We walk along the Promenade, past Murray House, which used to be the officers’ quarters of the Murray Barracks, and stood in Central before it was relocated to Stanley. There is a funny anecdote; the 3,000 building blocks were labelled and once the building was moved and restored, they were put back together. Except for a few stone columns that no one could place – and these stand now NEXT to the building but are not part of the building anymore. Usually there are some wedding photo shoots taking place at the building. Lina loves to watch those. We then head down to Blake Pier.

The pier was named after Sir Henry Arthur Blake, the twelfth governor of Hong Kong. It was built in 1900, as a ferry pier, and stood for years in Central… but with all the land reclamation, it had to move. So it also had to move to Stanley, like the Murray house. So the two are good neighbours!

After running and racing around Blake Pier and Murray House, we usually take a break at Stanley Plaza. There are many food options, including McDonald’s, Starbucks, Beef & Liberty, Classified, Mirch Masala Indian Cuisine, Flamingo Bloom, Cha for Tea and also Gino’s Gelato (among others). Pinot Duck has closed down and moved to Wan Chai, so we usually end up getting burgers followed by ice cream.

Once we had something to eat, the kids are free to explore the playground at the plaza, which is built in form of a big pirate ship. The kids like to race around it with their scooters and bikes, or just climb up and slide down, playing with the other kids. That’s the good thing, there are always other kids around and you can just sit next to the playground and watch them all.

Once we’ve had enough playtime, we might explore the quieter corners of Stanley and walk over to the Tin Hau temple, which was built in 1767 and said to be the oldest building in Hong Kong. It has undergone a complete renovation since then, however, and is now a concrete pile (though the interior is traditional).