Kimono are T-shaped, straight-lined robes worn so that the hem falls to the ankle, with attached collars and long, wide sleeves. They are wrapped around the body, and apparently you always have to fold the left side over the right and secure it by a sash, which is tied at the back. They are generally worn with traditional footwear and split-toe socks. 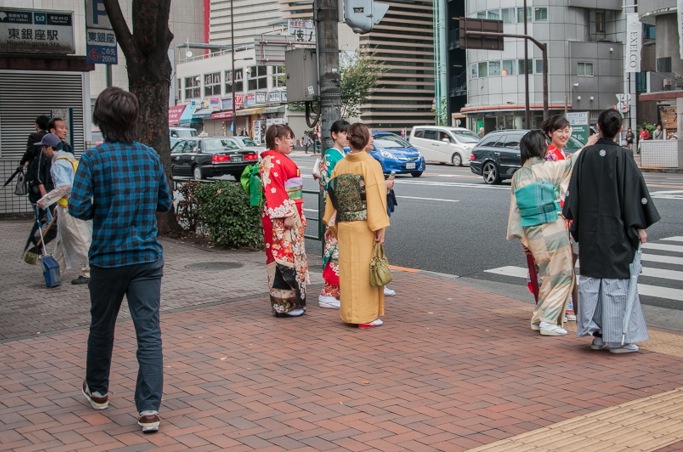 A few older women and even fewer men still wear the kimono on a daily basis. But most of the time, men and women wear the kimono at weddings, tea ceremonies and other very special or very formal occasions – so I am wondering where these women were heading to. 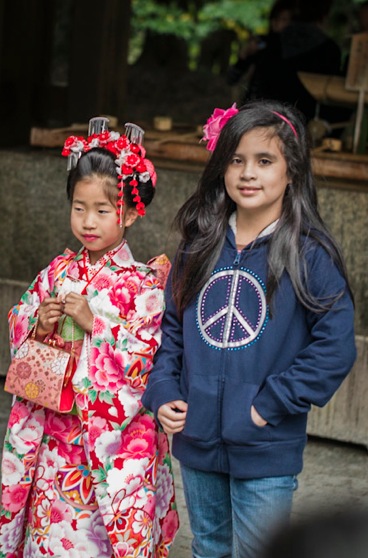 We also saw a few children dressed up nicely in kimonos visiting the Meiji Jinu shrine. I read up on it on the Internet and I assume they were celebrating Shichi-go-san (which was on November 15, but maybe they could not make this day?), a day of prayer for the healthy growth of young children. Shichi-go-san literally means seven, five, three; in most regions around the country, boys and girls aged three, boys aged five, and girls aged seven visit a Shinto shrine with their parents. Most girls wear kimonos when making their Shichi-go-san visit, while boys don haori jackets and hakama trousers.

November 15 was chosen for this celebration because it was considered the most auspicious day of the year, according to the traditional Japanese calendar. Because the date is not a national holiday, most families pay their Shichi-go-san respects on the weekends prior to or after November 15.

1 thought on “Tokyo: Kimono wearing women in Ginza and Shichi-go-san”