I noticed that I had still a number of posts about Tokyo in my pipeline, which stem from our visit in June and September 2015. I had plans to continue with those, but then decided to wait a little bit, given that we revisited Tokyo in May 2016. So let me now use this opportunity to post a little bit about Tokyo in this and the following posts, together with pictures taken at different times of the last 12 months.

Tokyo Station is the main rail terminal in Tokyo and the busiest station in Japan in terms of number of trains per day (over 3,000). With the Narita Express, Shinkansen, JR and private rail lines, plus the Tokyo Metro passing through, most visitors end up transiting at Tokyo at some point during their trip.

Recent visits to this station might not have been all that impressive, as it was undergoing a big renovation. But this has changed now.

The front on the Marunouchi side has been finished in late 2014 (if I am not mistaken). It is a prominent red brick building, which dates from the Meiji Period.

The inside is really beautiful renovated too – this is just the entrance with the ticket counters: 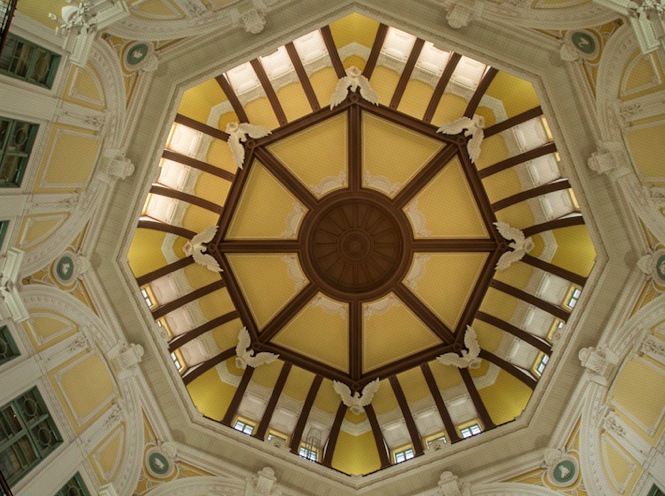 More construction works have been going on the opposite side of the station, the Yaesu Side, where three skyscrapers were added to the station complex in recent years, and a pedestrian deck is currently being built.

We walked through the station, explored the food court (there is a special Ramen street where you can try different types of Ramen without having to travel all across Japan) and the character street (lots of different Japanese characters are on sale), and had some great katsu curry for lunch.

But what I enjoy actually the most, and probably toddler Lina would agree, is to go to the rooftop of the KITTE complex, which is next to the Tokyo station on the Marunouchi side.  This is the old Central Post Office building that went through a magnificent face lift. The name is a play on kitte (postage stamps) and kite (come on over!).

KITTE has a beautiful rooftop on the sixth floor from which you can oversee the Tokyo station and its surroundings – and not only is that a great vantage point, it is also a space that your toddler can explore safely! Lina kept running and running around, she thought it was fantastic.

The lower floors are home to a panoply of shops and restaurants – nearly 100 in total, with a focus on Japanese aesthetics and cuisine. In the centre is a bright, central atrium that rises up to an outdoor garden on the 6th floor, and there are plenty of different restaurants to choose form.

We just tried one and had a great lunch there – not sure what the restaurant is called, but we had great Okonomiyaki – a dish that Lina enjoys very much. I guess I have to find a recipe now to replicate this at home!