Watching Sumo in Japan has to be a once-in-a-lifetime experience – it was something that I always wanted to do, but we had never managed to travel to Tokyo during the times of the big tournaments (15 days in January, May and September). This May it was going to be different, so as soon as we knew our travel dates, I booked our Sumo tickets.

Buying tickets
Initially I had thought it would be too difficult to obtain tickets directly, without the help of a Japanese travel agent, but it is actually quite easy and straightforward to purchase tickets from abroad. You just have to visit the website of the Japanese Sumo Association, check for the dates when the sales start (usually four weeks before the first day of the tournament) and then book your seats online as soon as the sale starts. Not all seats will be available via the website, there are some exclusions such as the ringside seats and the family box, but you can still book the majority of seats online. 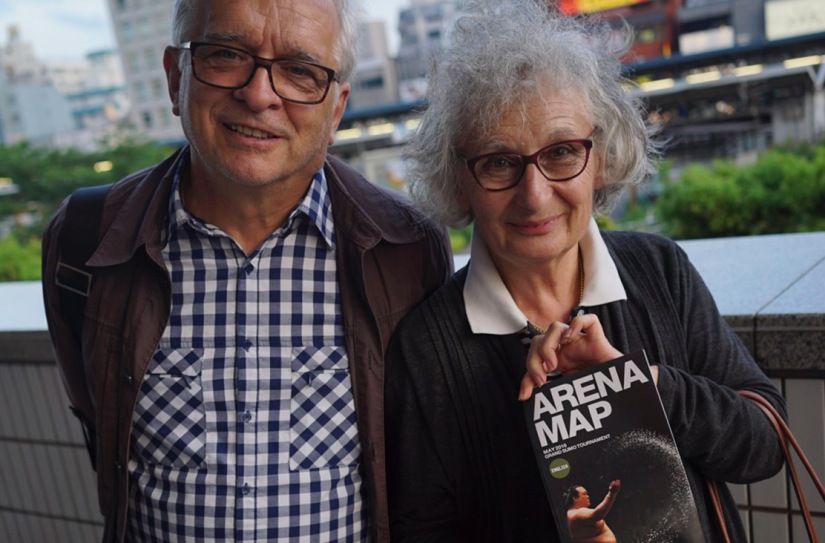 I booked my tickets in the first hour of the sale, and the tickets were for a weekday, so it was no problem to purchase three tickets (children under 4 don’t need a ticket but then they won’t have a seat) and choose our seats. I secured seats in the second row of the balcony, on the West side. That’s in the seating category A (8,500 Yen per seat). A little further away are balcony seats in category B (5,100 Yen per ticket) and in category C (3,800 Yen per ticket).

There is also one section for exclusive use by holders of same-day tickets, the cheapest ticket type (2,200 Yen) that can only be purchased on the day at the stadium – but I have no idea how early you would have to go to the stadium to secure a same-day ticket. The box offices is open from 8am to 5pm. When we arrived around 2pm all tickets for the day had been sold already.

The venue: Ryogoku Kokugikan
The Ryougoku Sumo Hall is located in the Yokoami neighbourhood next to the Edo-Tokyo Museum. It is a 5-minute walk on foot from Ryogoku Station on the Tokyo Toei Oedo Line, and very hard to miss – with its distinct design (and the crowds of people it attracts during tournament days).

The hall can seat more than 10,000 people (depending on the seating arrangement). The ring, or dohyo, is made of clay and located in the middle of the hall, with the spectators’ seats arranged all around.  The edge of the ring is made of tightly wound straw bands called tawara – and that’s the boundary that a sumo wrestler can’t overstep without loosing his fight. I was surprised to learn that a new dohyo is created for each tournament.

The ringside seats are so close to the dohyo that spectators might get sprayed with the sand from it during the bouts. A little further away are the four-person boxes with wooden boards and cushions to sit on. On the balcony are Western-style seats. 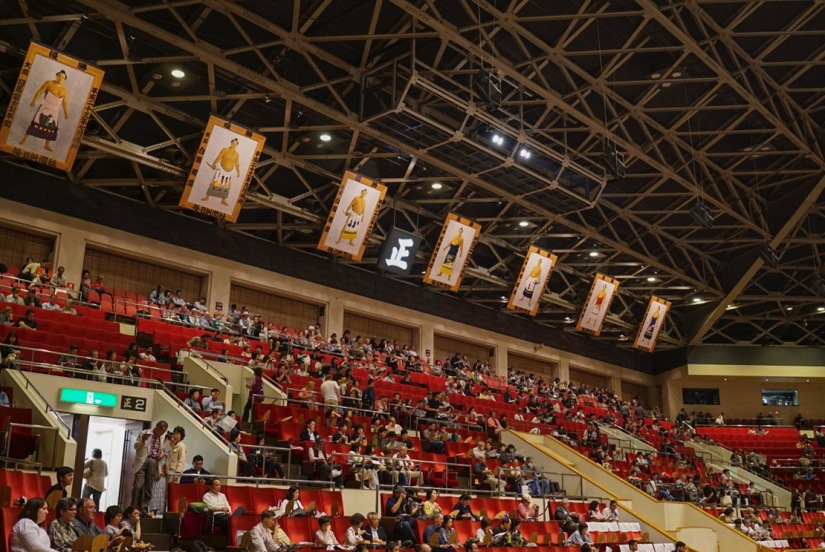 Interestingly, you can eat and drink while sitting in a box or on the balcony – and there are several stalls selling food and drink outside. The Bento boxes are very popular and sold out quickly around noon, but throughout the day you can pick up limited edition hiyochan-monaka ice cream (I tried the matcha one and that was very nice), soft-serve ice cream, yakisoba and yakitori, chocolates in the forms of wrestlers and several other snacks.

A typical tournament day
The doors open at 8am. Lower division matches start around 9am, second division (Juryo) matches from 3pm and top division (Makuuchi) matches from 4pm. The highest ranked wrestlers (rikishi) have their matches just before 6pm.

So if you don’t want to spend a whole day in the stadium, you could do what we did and arrive at 2pm. At that time the Makuuchi rikishi started arriving at the Kokugikan’s South Gate and you can cheer on your favourite rikishi.

We then went indoors and took our seats, to watch the first of the bouts that took place in the ring at the heart of the hall. First we watched the second division (Juryo) matches taking place – the rikishi quickly bowed, threw rice and pushed each other out of the ring. 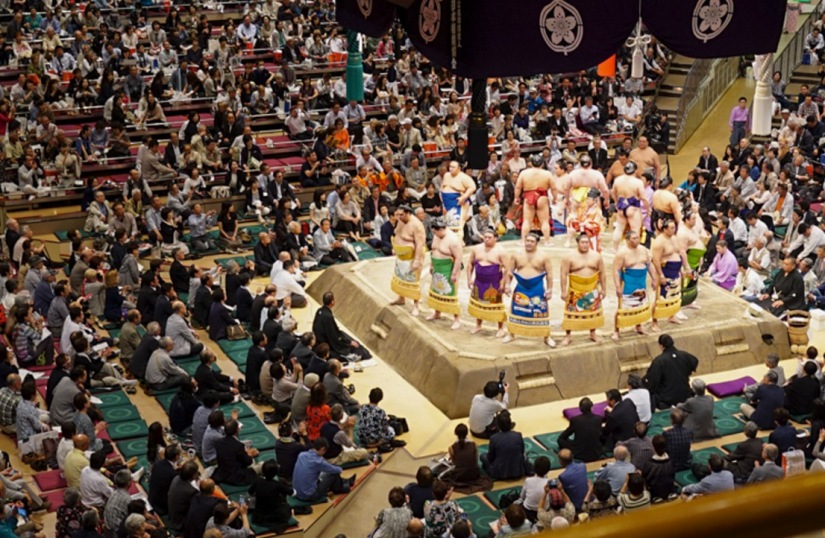 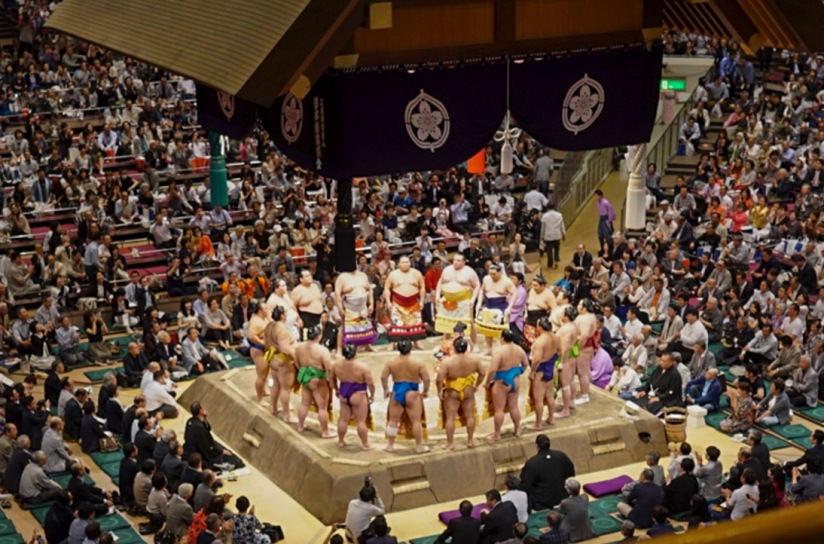 Then the hall went silent, the excitement grew and the  top division matches started – and the intervals between bouts lengthened as they included longer preparation times and more pre-match action (including the display of the banners of the sponsor) between the high-ranked wrestlers. Once each bout was over, there was cheering and clapping for the winner – the whole stadium was buzzing with excitement.

Each bout took longer and there was much more cheering for the favourites of this year’s May tournament. At 6pm, the final bout had taken place and several viewers had thrown their seat cushion into the centre of the hall. It was a great atmosphere, everyone was cheering and clapping – and the 9th day of the tournament closed with the typical bow-tirling ceremony.

Basic rules
I had read up upon the basics of Sumo beforehand, but I am still a novice – so this is just a very basic 101 on Sumo.

Five judges (former rikishi) sit around the ring. A referee, dressed in an elaborate kimono stands at the edge of the ring and officiates every single bout.

After their shikona (official wrestling names) are called, the rikishi climb into the ring, stamp their feet and throw purifying salt into the ring. They then lowered their waist, opened their knees to the side and placed a fist on the ground, to signal that the match starts. The rikishi quickly dashed forward, trying to catch each other off-guard. A rikishi loses a match when any part of his body other than the bottoms of his feet touches the dohyo or when he is pushed or thrown outside of the ring.

At the end of each bout, a kimarite, or winning technique, is announced informing the spectators exactly what method was used to win the bout. 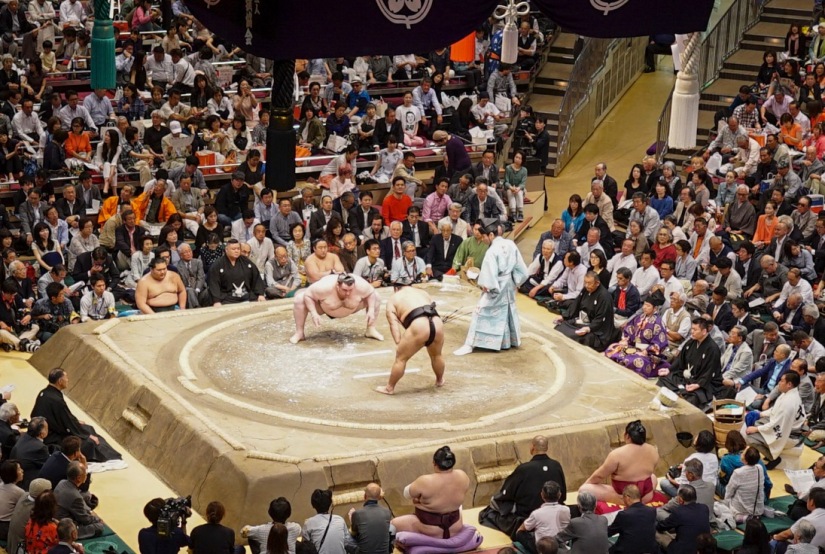