A friend of mine regularly goes hiking and I joined her and her husband for a hike last weekend. We decided to walk the Wilson Trail Part 3 (her plan is to walk the whole Wilson Trail and she had already done parts 1 and 2). The Wilson Trail is a 78 km long-distance footpath in Hong Kong named after David Wilson, Baron Wilson of Tillyorn, who was Governor of Hong Kong from 1987 to 1992.

The trail is aligned north-south and runs from Stanley, in the south of Hong Kong Island to Nam Chung, in the northeastern New Territories. In all, the Wilson Trail traverses eight of the Country Parks. On Hong Kong Island, Tai Tam Country Park and its Quarry Bay Extension begin the journey. Across the harbour, there is a gap where the Trail runs through hills outside the parks. Then come the three parks named Ma On Shan, Lion Rock, and Kam Shan. In the central New Territories, the Wilson Trail heads north through Shing Mun Country Park and Tai Mo Shan Country Park. Finally it climbs into the majestic Pat Sin Leng Country Park.

Section 3 starts at Yau Tong MTR station and it took us three attempts to find the start of the trail. We had to go through the residential area and through a maze of fish shops and restaurants. 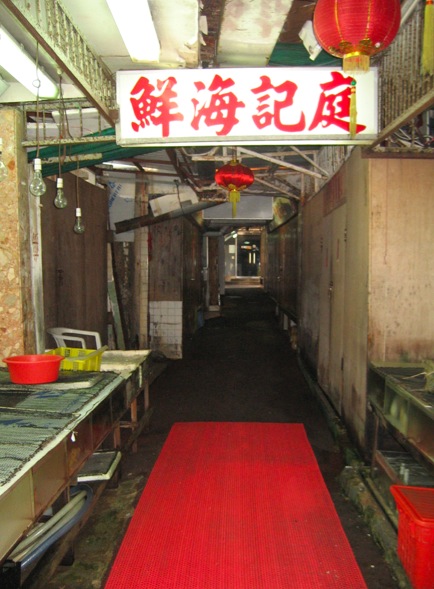 At that point of the day they were still closed, but fascinating to look at.

I can actually see us coming back to try the fish (and the big lobsters!) one evening.

We greeted the few shop owners that were up so early and walked past the stores and shops. 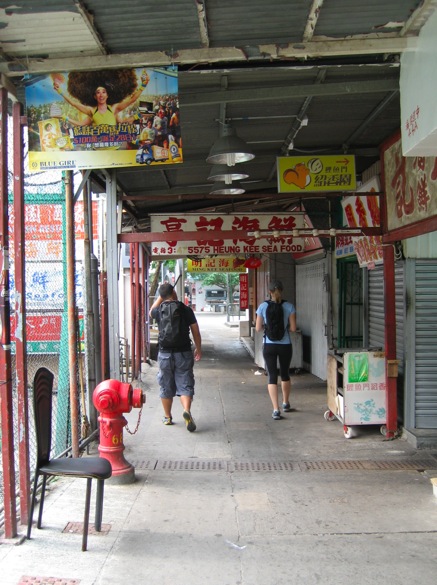 We walked alongside the bay until we came to the Tin Hau temple.

At this point we were too far and had to walk back to the village, until we found the stairs with the big sign of the Wilson Trail.

The first stairs are steep and we climbed up quickly Devil’s Peak (222 metres).

Past the remains of an old hilltop fort, the trail has fine panoramas – out across Tathong Channel to turtle-shaped Tung Lung Chau, over the harbour to its rim of buildings and mountains, and northeastwards to Clear Water Bay Peninsula. The weather was not clear enough to see all of this, so we have to come back another day!

We walked past a big cemetery up and down the hill until we reached the foot of Black Hill (304 metres), which we climbed up. The hill itself – steep, rocky, scrubby – drops down to a fringe of tower blocks, farthest sentinels of urban districts that reach back and back. You are in the rural area, but the urban area is so close, showing how small Hong Kong really is!

After Black Hill the walk was easy – just downhill, past some interesting and bizarre figures and sculptures hidden away in the jungle.

We walked through a village, crossed a street, walked further downhill until we reached Clearwater Bay Road. That was the end of trail 3, and we felt a little cheated – we had been told it was more than 9 km and would take us 4 hours, but with breaks we only took 3 hours. Not sure if we walked quicker than expected, or the measurements are not correct!

Either way, we took the minibus to the next MTR station and then went back to Central where we enjoyed a nice ‘yum cha’ (dim sum) lunch.