A few days ago we decided to visit Peng Chau, our neighbouring island. Around 6,300 people live on the island, which being only around 1000 metres long is densely populated. Peng Chau is served by ferries from Central Pier 6 on Hong Kong Island (timetable here), but for us it was easier to take the inter island ferry between Discovery Bay and Peng Chau from Kai To Pier. The ferries run at least once every hour and the journey is just 15 mins for 5,50 HKD.

There are no cars on the island, just bicycles and small motorised carts. It is possible to walk round the whole of Peng Chau in just over one hour as the island is relatively flat, but we took our time and strolled leisurely through the village and the surroundings.

From the pier, a broad avenue leads to a Tin Hau Temple, which is on the narrow main street. It is one of many temples in Hong Kong dedicated to Tin hat, but what makes this one special is the stone tablet outside, dating from the Qing dynasty. According to this, there was a decree to the effect that when soldiers were chasing pirates, they were not permitted to commandeer islanders’ fishing boats.

We continued south along the main street, walking past stores and small restaurants, all packed tightly together. We turned left, walking past the public toilet and some houses, to reach the other side of the island, looking out over a bay to the East. There is a red-brick temple dedicated to Lung Mo, the Dragon Mother.

There were lots of little Buddhas in there, and apparently pregnant women come to this temple to pray that their children will be strong (like Dragons). We left the Lung Mo Temple and strolled around the small beach. All was very quiet, just a few fishermen were repairing their boots. We waved hello and walked past the houses and boats.

The one thing that surprised us were the squid that were hanging to dry – see this picture here? The squid just hang there, out on the beach, just on a string. I know they are a delicacy, but I can’t believe they just hang there on a string with cloth pins and we could have just touched them (we did not).

Peng Chau is also known for its organic farms, and as soon as you leave the small village you walk past a number of small gardens and farms where people harvest their fruits and vegetables.

We saw a lot of fresh green bananas on the trees…

… and also a lot of star fruit trees. There were so many that a lot of fruits were just left idle, falling to the ground!

We continued our walk around the island, following the easy family path. It took us around the northern part of the small island.

There are a couple of bays and the view ranges from Hong Kong in the East (on a very clear day), to Disneyland in the North (not much too see, the castle is hidden by some large trees) and Discovery Bay in the West. After lunch we ‘climbed’ the 95 meters up Finger Hill, the highest point on the island.

From there we gazed out at the city to the east and the castle and amusement park rides of Disneyland to the west.

Afterwards we made our way back to the village centre from where we boarded a ferry back to Discovery Bay. 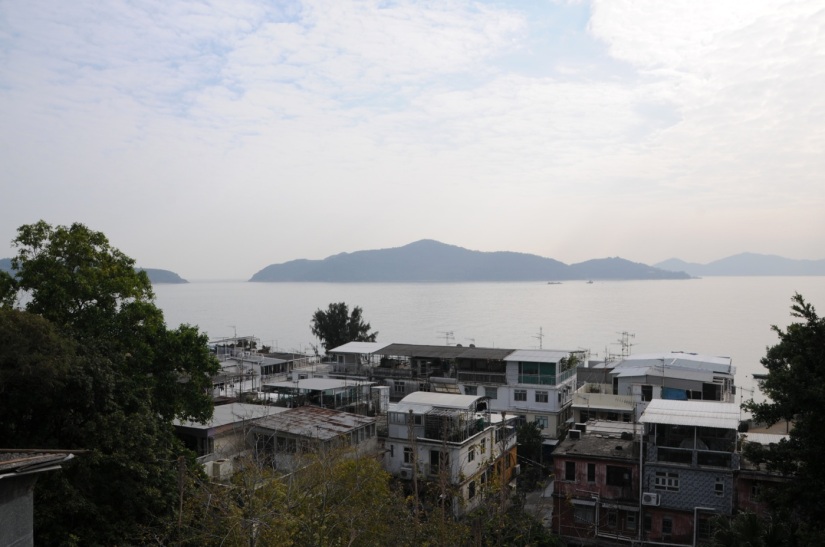