This hike covers two mountains, one slightly smaller, the other slightly taller. Still, they are called the Twins (anyone remember the silly Danny De Vito and Arnold Schwarzenegger movie with the same title? Danny is tiny and Arnold is huge. That’s how climbing the Twins feels, especially if you’ve completed he first one). 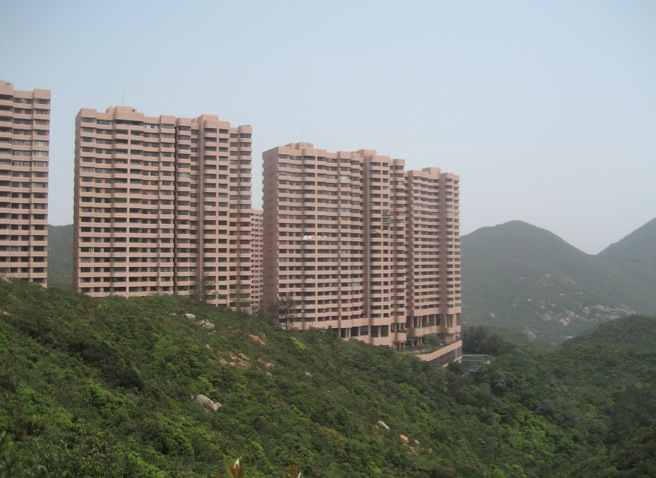 The hike actually starts at another mountain, called Violet Hill. So maybe it should have been called triplets instead? To get to Violet Hill, you’ll have to go to Wong Nai Chung Gap Road – if you take the bus, you’ll have to continue walking uphill until you see the pink Parkview apartment complex (see the picture above). If you take a cab, just tell them Parkview and get off a little earlier.

Although Violet Hill does have some shady parts it is a tiring hike – especially on a sunny day. There was not much of a breeze when we hiked, we were already sweaty and soaked before we reached the base of the first Twin. 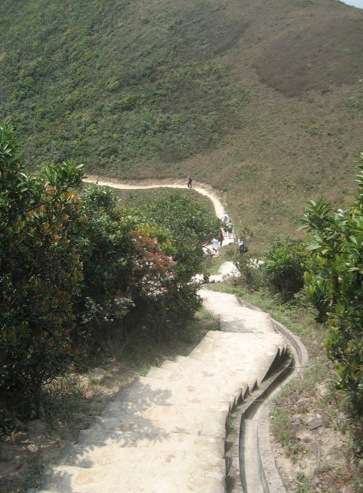 It is all uphill, a set of 10-12 steps with a small break and then another 10-12 steps again. The hike is in the shade, but it is still tiring. Because you are climbing uphill you can’t really see the view – you have to stop in between, catch your breath, turn around and then view the surroundings.

As a fellow blogger on her blog Tiny Tidbits says: “It is like looking at a Hong Kong we’d never seen before. Lush greenery stretches out for miles together, only to be broken by splashes of pink, red and white. Blue waters beckon with lazy abandon near the reservoir.”

Once we’ve reached the first peak, it is all downhill from there… well, until you hit the lowest point and have to climb up again. It’s another big climb. After the first steps, we stopped counting. Some helpful soul had written on every 100th step in white numerals – so we just knew we had to keep going. 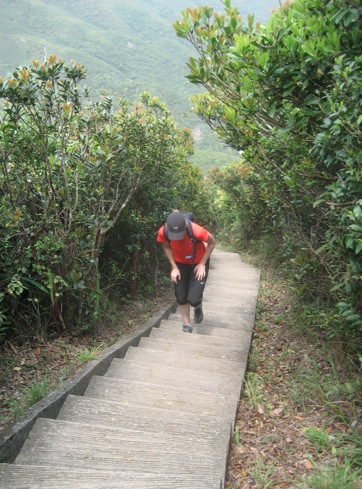 We took frequent breaks and enjoyed the view around us – it was a good excuse for catching our breath again. We had been hiking frequently recently, but a hike on the Twins in the sun is not a walk in the park. Especially as the hike keeps going and going – you can’t see the end of the trail, all you can see is just the next peak and there might be another, higher peak hiding behind it (it felt like the second Twin had quite a few humps on his back!).

Once we’ve reached the peak we sat down and took a few pictures of our surroundings. The weather was not great, it was hazy, but we could still make out Stanley, Repulse Bay and South Bay. The whole hike took us about 2 hours, which is quite slow for 4.8km – but it was a very hot day.

We walked downhill, following the foot path, to the end of the Wilson Trail at Stanley Gap Road. From there it is a 30 minutes ride on the bus number 6 to Exchange Square in Central.

If you want to see more pictures of this hike, check out Tiny Tidbits, there are some great flower shots and nice views.