So, Kyoto was the easy part. We stayed in a very nice Western-style hotel, knew exactly what we wanted to see and if we did not rely on our feet, we just hopped into a train or taxi to get to the next sightseeing spot. If we were unsure were to go, there was always some friendly person helping us to decipher a plan or point out which street we are walking on.

However, we decided to be brave and leave Kyoto for Tokyo – but not on the direct way. Instead, we wanted to see some of the country side and explore the Japanese Alps a little bit. We’ve did our research and figured out it could not be too difficult to get on a train from Kyoto Station to Takayama, then take a bus to Matsuomoto and finally the Shinkansen all the way south to Tokyo.

We found the Hyperdia Timetable incredible useful, it provided us with a range of travel options and departure times – once we knew where we wanted to go, we wrote down the trains and buses we were planning to take. As soon as we had our Japan Rail passes, we went to the Japan Rail desk at the Kyoto Station and booked seats for the faster trains, like the Shinkansen.

Then on a Friday morning, five days after we had arrived in Kyoto, we checked out of the hotel and made our way in a taxi to the funky modern Kyoto Station. I wish I had taken a picture of the building, it looked a little out of place, so shiny with lots of glass and metal.

At the Station, we showed our Japan Rail passes to the guards at the gates and they waived us through. We walked to the platform 12, dropped of our luggage and picked up our cameras again – there was so much to see. Lots of business men in suits, people wearing face masks (to protect themselves as well as others from spreading germs), mothers travelling with their small kids and of course, lots of tourists waiting for the Shinkansen to arrive.

The Bullet Trains are frighteningly punctual – two seconds late on the platform and you’ll be waving goodbye to the back end of the train – and very reliable: only the severest weather conditions or earthquakes can stop them from running. We only waited for a few minutes and saw three different Shinkansen trains arrive and depart.

The conductors and guards were making sure that everyone got on and off the train smoothly – it was nice watching the guards with their white gloves, blowing their whistles and showing the stop or go signal to the train drivers. 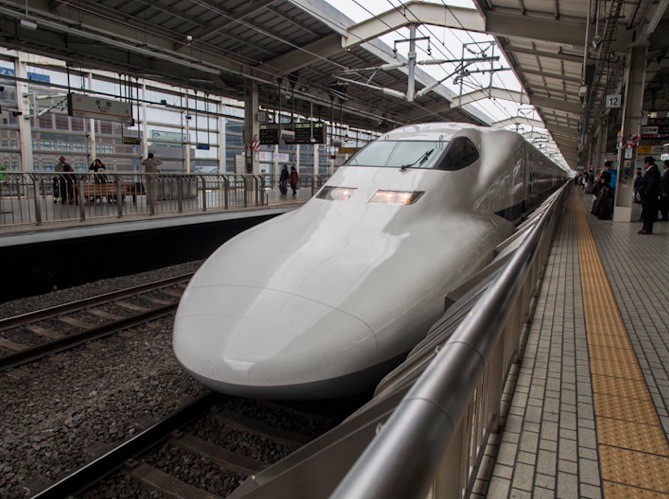 We took the 10:56 Shinkansen Hikari 464 from Kyoto Station, which took us in less than 40 minutes to Nagoya. There was hardly enough time for Patrick to unwrap his bento box for a late breakfast/early brunch, but he made it – and enjoyed it.

Incredible what nice food is being sold at a busy station in Japan – in Germany you might be able to pick up a fresh sandwich and if you are lucky, maybe some salad or fruits too – but that’s it. The bento box Patrick had was elaborately decorated, had lots of different rice, fish and vegetable dishes and was really tasty. A feast for the eye and the stomach!

In Nagoya we just followed the signs to the local Hida trains, which take 2,5 hours to travel through the Japanese Alps to Takayama. The train departed a few minutes after we had arrived, but it was no problem to change the trains in less than 10 minutes.

Once we got on the Hida train, it was a beautiful ride, in a wagon with big windows so we could watch the scenery outside roll past us, like in a movie. We saw lots of small villages and houses, fields and cows, mountains and rivers. The Central Honshu area is really beautiful. More about it in the next days.

3 thoughts on “Travelling from Kyoto to Takayama”