We travelled from Takayama one hour on a bus to reach the Gokayama region. This region is famous for its traditional gassho-zukuri houses, which have survived for hundreds of years because the region’s secluded location in the upper reaches of the Shogawa river. This is also the reason that Gokayama’s lifestyle and culture remained very traditional for many years after the majority of the country had modernized.

Our first stop was in Ainokura, which is the second smallest gassho-zukuri village. Our bus guide told us that three villages had survived – Suganuma with only eight houses, Ainokura with 20 and Shirakawa-go (which we visited later) with almost 80 houses.

The gassho-zukuri style, which is loosely translated as “prayer-hands construction” style is characterized by a thatched and steeply slanting roof resembling two hands joined in prayer. The design is exceptionally strong and, in combination with the unique properties of the thatching, allow the houses to withstand and shed the weight of the region’s heavy snowfalls in winter.

When we visited in late March, there was still lots of snow on the ground – but nothing compared to the pictures on this blog post, when there were walls of snow. 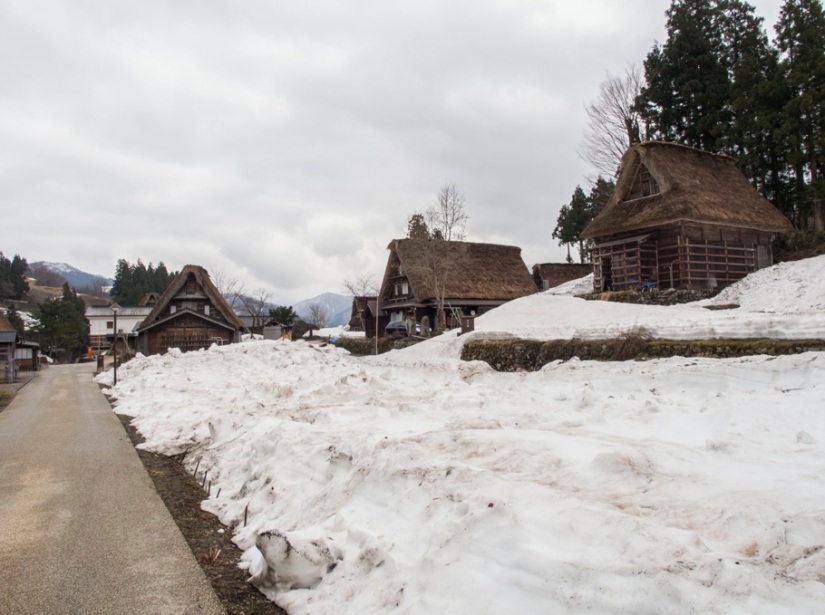 However, there are two folk museums, which you can visit. Number one is the old Ozaki residence, while number two is the old Nakaya residence – they both showcase how people live in these houses, with the open fireplace, plus items for everyday use – from old rice containers to winter straw sandals. The museums are open from 8.30am to 5.00pm every day and entrance fee is 200 yen per adult (100/50 yen for students).

We only had an hour in this village before our tour bus left – so we just quickly walked around, had a quick coffee in one of the shops (to warm up) and played with this dog.

He was very cute, he kept barking at every person walking past him. But it was a friendly bark, the guy wanted to play and was looking for someone to stroke his furry back. So we did and then we left again, on our way to the next village: Shirakawa-go.