I’m always a big fan of the Pearl Lam Galleries in Hong Kong, they put on such great and fun exhibition (for example the Jim Lambie exhibition earlier this year). Just before Christmas I went to see Yinka Shonibare’s exhibition there, which runs until January 9, 2014.

This is the first solo exhibition in Hong Kong by the British-Nigerian artist and it explores the relationships with labour, power and wealth in Hong Kong. It portrays elements and logos of luxury commodities in a sarcastic light, pointing the finger at the overwhelming commercialism in Hong Kong. 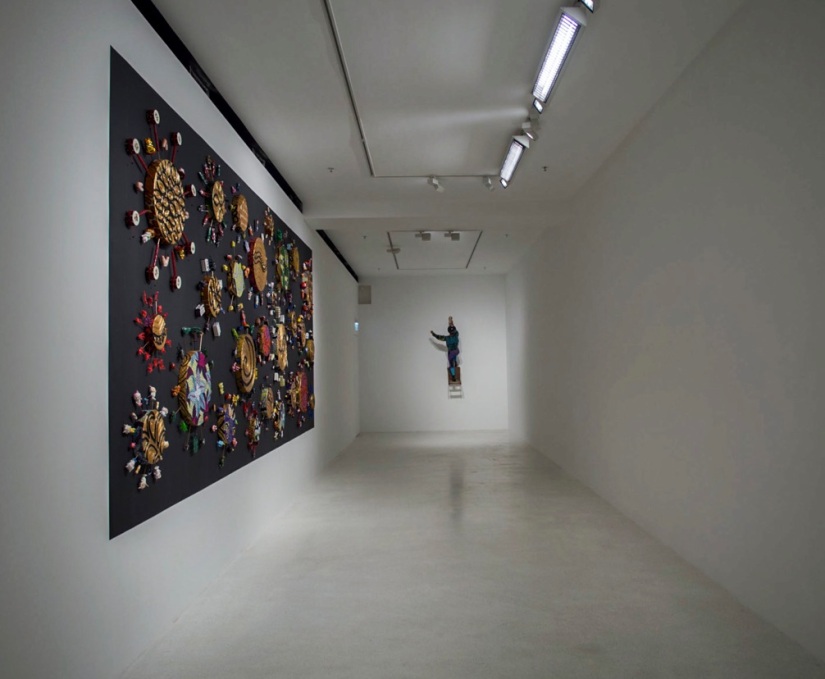 The exhibition has three main elements, and out of those I liked the wall installations best. They are huge, six metres wide, and they contain round paintings/sculptures. Each of the circular canvases is painted black and gold or is covered with textiles that features an African print.

Attached to each canvas are sticks on which sit different elements. For instance, on the black wall installation, the elements are toys collected from Hong Kong. Some of them are action figures, others are small-scale versions of the doubledecker tram, buses or the star ferry. 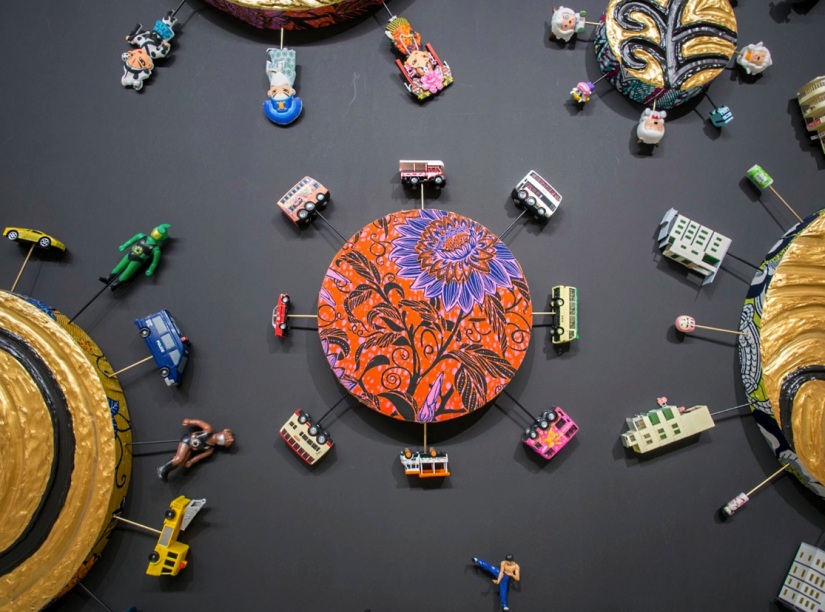 Also kung-fu fighters are featured, resembling one of the most famous actors of Hong Kong: Bruce Lee.

The blue wall installation is even more poignant. It features small toys painted in black, but with sparkling stones added to them. Does that mean guns are now becoming a fashion item? Or does fashion kill? I don’t know.

Next to the guns are the logos that every person coming to Hong Kong knows… all the big label brands that charge a fortune for their products and are so popular with shoppers, that they actually queue outside. With these installations Yinka Shonibare captured Hong Kong’s economy and its desire for luxury goods well – and the dark side to it.

The other element, next to “Cake Man” (which I failed to take a picture of) are three or four individual Champagne Kid sculptures that can be seen cavorting, or swinging
from chairs attached to the walls of the gallery. They are a sign of over-indulgence and with their heads replaced by globes displaying monetary data they build a powerful commentary on the excess of anonymous financiers across the globe that contributed to the 2008 financial crisis.

The show ‘Dreaming Rich’ is on until January 9, 2014. You can read more about it here . Pearl Lam Galleries are on the sixth floor of the Pedder Building in Pedder Street, Central Hong Kong. The galleries are closed on Sundays.