Tsukishima is a sleepy little man-made island in the heart of Tokyo – and upon looking in several guide books, there was not much being said about this little quarter. But still, I was curious, it was so close to where we were staying and it looked intriguing, some old houses and a local food specialty were mentioned… so we decided to visit the artificial island, which was created in the middle of the Tokyo Bay in 1892.

It sits across the channel from Tsukiji fish market, and it can easily be reached via the subway. That’s what we did, we took the train to the Tsukishima station and explored the atmosphere of old Tokyo by poking around the back alleys and lanes, especially around Sumiyoshi Shrine.

Tsukishima was home to many fishermen so it felt right to start our exploration along the river. So we walked along the Sumida river – runners seem to love this riverside route that provides smooth surfaces, challenging staircases and captivating views. They kept overtaking us, and they were the only other visitors during the time we strolled along the river. 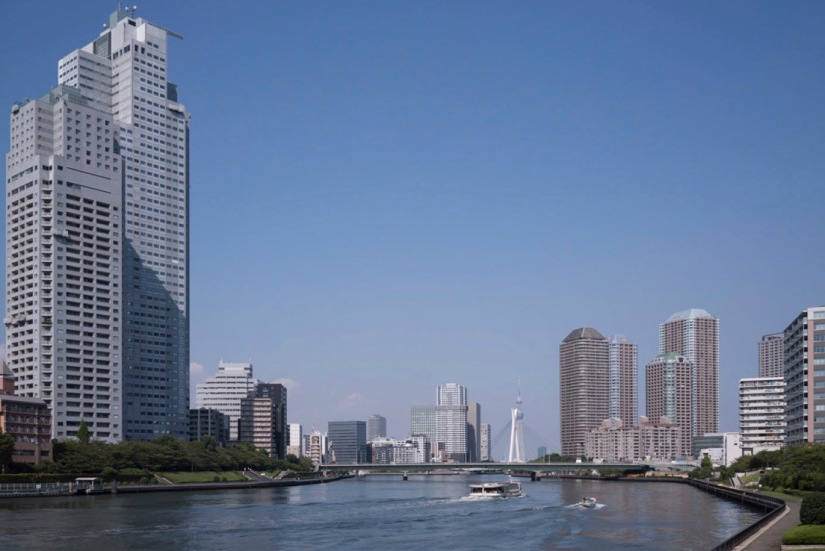 Then we entered the traditional nagaya row-houses and roji alley area close to the Sumiyoshi shrine – a beautiful maze of narrow alleys in the northern part of Tsukishima. Small houses, a little park and playground and a couple of house boats – it all was very picturesque and quiet. We saw a few locals chatting to their neighbours and plenty of cats sleeping in the sun.

Tsukishima feels nothing like the rest of Tokyo, and as this travel blog states, it is a contrast of “quiet lanes instead of busy boulevards, two-story houses instead of steel skyscrapers and a sleepy sense of small-town tranquility instead of the exhausting bustle of perpetual commerce. 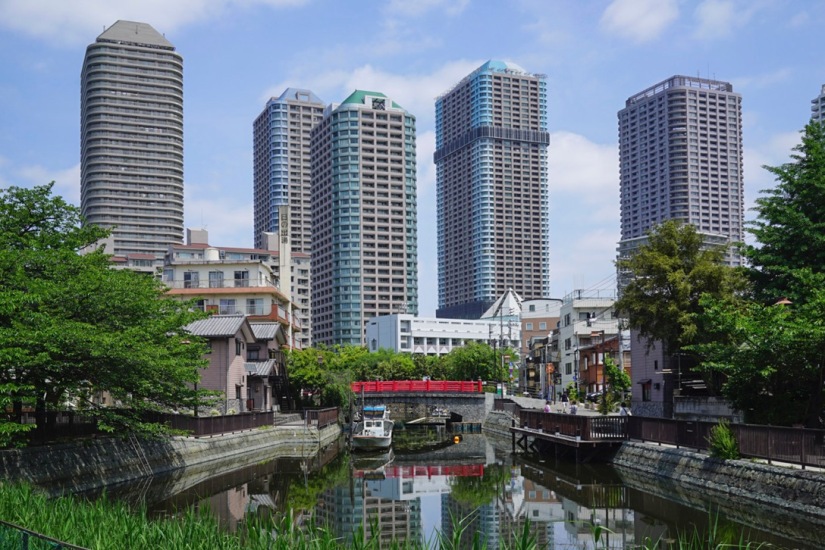 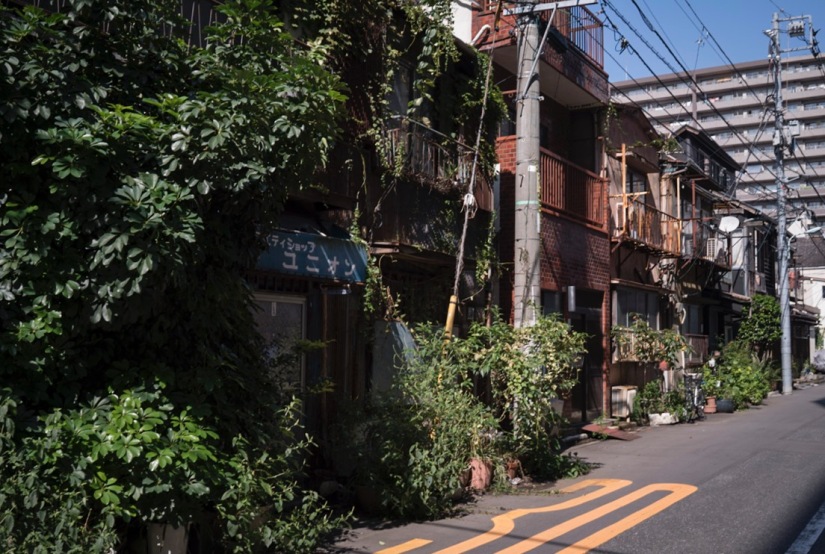 The Sumiyoshi Shrine is a Shinto shrine, dedicated to the gods of the sea – again, it was quiet when we visit the shrine, no one else was in this area. 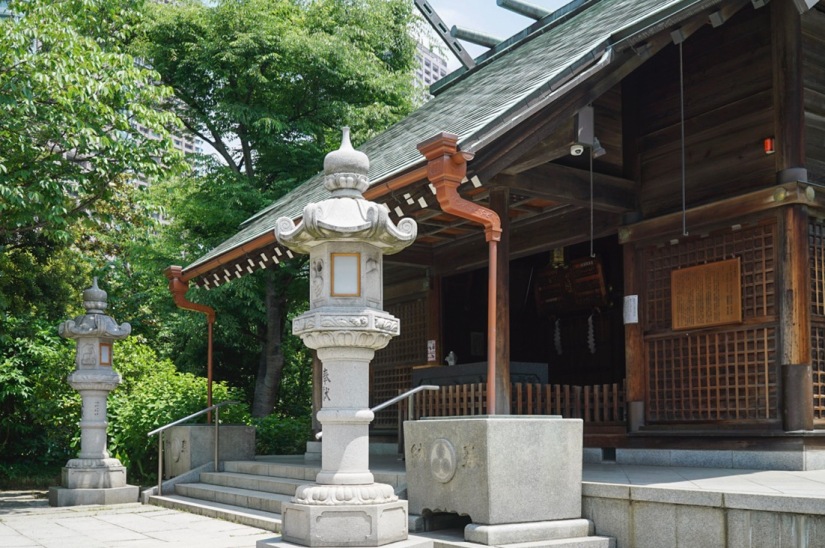 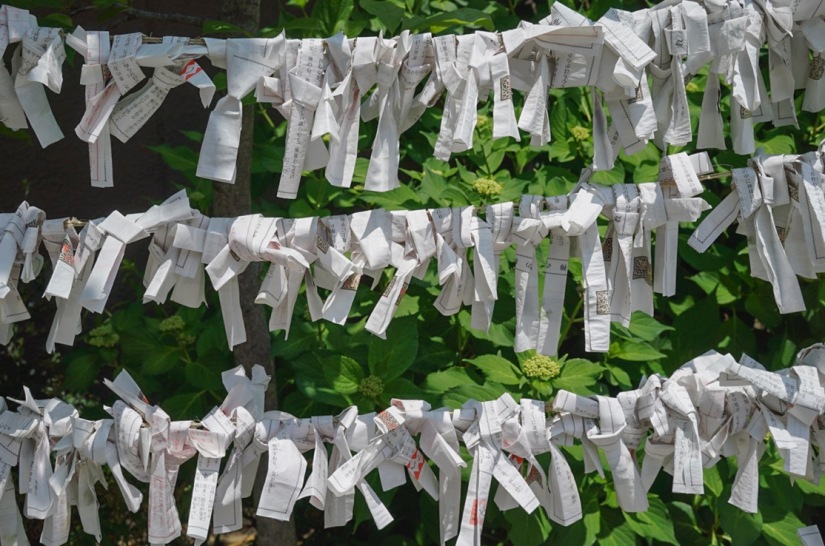 On our way back from the shrine, we passed several small, old-fashioned shops – one was selling nori paper, another one rice crackers, then one with lovely paper items. 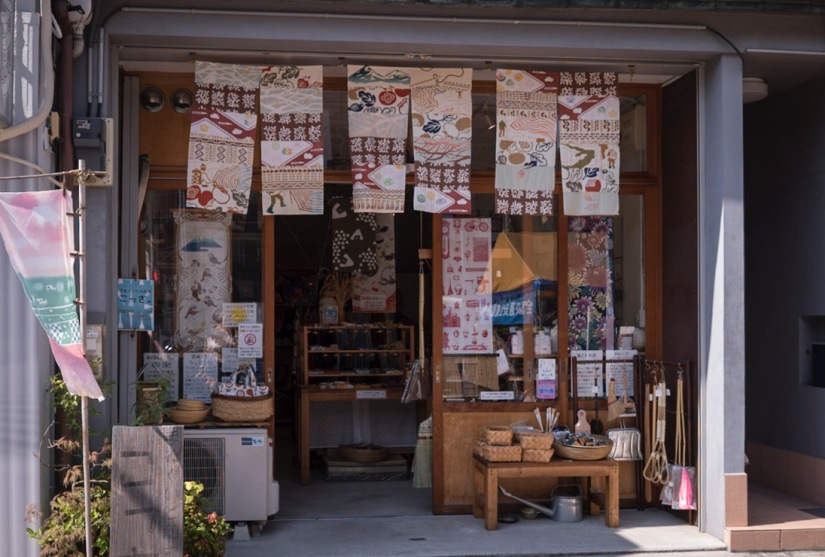 Finally, we entered the famous Nishinaka Street known for its Monja…

Monja is short for monjayaki, a kind of runny pancake with different ingredients, such as seafood, meat and vegetables, mixed into the batter. The various ingredients are self-cooked on a table-top grill, which attracts tourists of young and old not only from all over Japan but also from abroad, and more than 70 monja shops in the tiny island are packed with eager customers from noon to evening.

There is even a Monja Info Centre, which will provide you with a map of the restaurants, educate you on how to cook the sticky delicacy and answer any monja trivia questions you may have (and it even sells a ‘monja fan t-shirt’!).

Unfortunately, the volunteers won’t tell you which place has the tastiest creations: you’ll have to find that one out for yourself.

P.S.: Here is a useful map for your explorations in and around Tsukishima.

2 thoughts on “Tokyo: Strolling around Tsukishima and eating Monja”