Probably everyone knows of or has been to Repulse Bay Beach – but what many people don’t know is that there are two quieter beaches close by. One is Middle Bay Beach and the other one is South Bay Beach.

What I like about these beaches is that they are much quieter, the water is usually very clear and most importantly the shore is not rocky. As much as I like the beach at Chung Hom Kok, you have to be careful at which location you enter the water. In some places there are big stones/rocks and small reefs, which is nice if you want to go snorkelling but not great if you are in the water with small kids.

Our current favourite is South Bay Beach – just because it is more secluded, quiet and less frequented, largely due to the one-mile walk to find it – along the South Bay Road via Middle Bay Beach.

Located behind Repulse Bay at a dead end street, South Bay Beach is tucked away from the road. On the one side of the street are the public restrooms (and hence there are usually one or two taxis waiting for customers), on the other side are the steps downhill to reach the beach.

South Bay Beach is a typical HK beach – there’s a changing area with showers and a bit further to the West, a few BBQ pits. We’ve not been here for a BBQ, we either visit this beach during a late weekday afternoon or early on the weekend for a breakfast picnic at the beach.

Lifeguards are on duty during the daytime – from April to October.

There is a small cafe on top of the changing rooms, which sells drinks, ice cream, snacks and a few supplies – so if you have forgotten something, you can stock up there (but bear in mind it is going to be expensive).

Usually the beach is much quieter than Repulse Bay Beach – and it is always very relaxing to visit. The only downsides are: there is no wheelchair/stroller access and the toilets are not on the beach but across the road. 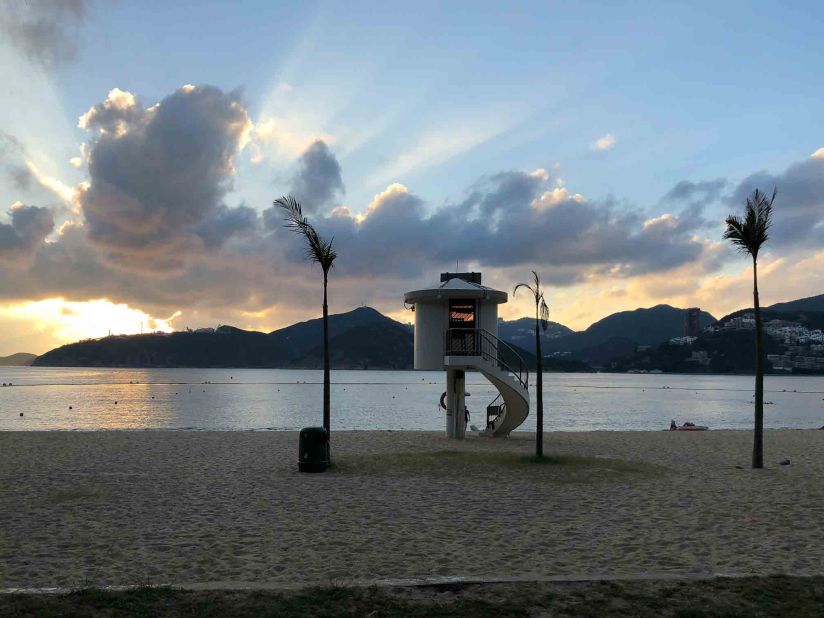 The Beach is best reached via taxi, just tell the taxi driver: Lam Wan Beach. You can take public transport to Ocean Park (via MTR from Admiralty) or with a bus to Repulse Bay, but there is no public transport between Repulse Bay and South Bay Beach