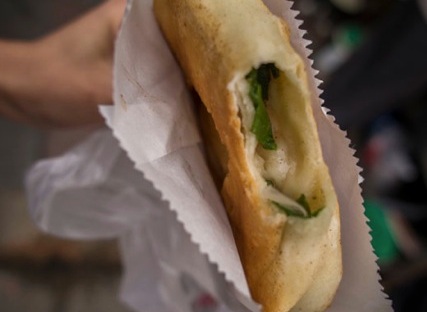 Taipei is famous for its night markets – but they actually already start in the late afternoon. So after we visited the Bao-an temple it was still early, but a street close by was already setting up the stalls for the street food vendors. They were already selling the first dishes to some locals, who sat down and enjoyed the oyster pancakes, rice sausages, fried shrimp rolls, steamed squid, pig blood cake, stinky tofu etc.

I spotted a stand selling leek and spring onion rolls with lots of black pepper – I’m sure you could also get the rolls filled with some meat, probably pork, but I was keen to try the vegetarian version. It was piping hot, very peppery and full of leek and spring onions. Very tasty as an appetizer, you could probably add a sausage and eat it as a complete meal.

Another day we visited the Huaxi market, which is close to the Longshan Temple. There are lots of different stalls and restaurants selling food – this one looked particularly inviting. Just a shame that I was not hungry. 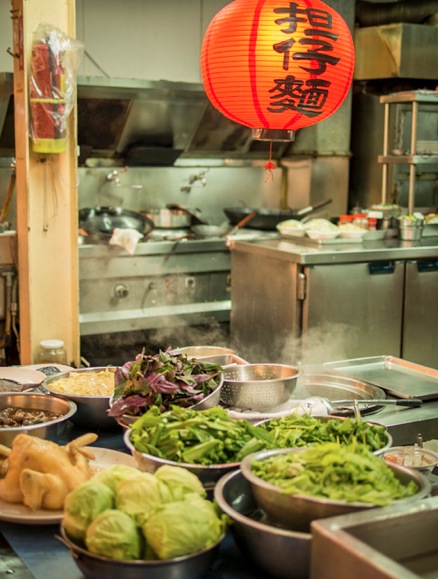 The lady below is making Imagawayaki or Obanyaki, which is a cake like waffle filled with a variety of fillings including sweet bean paste and vanilla custard. The ones on the picture are filled with some pulled pork, fro what I can tell. Either way, this snack is more Japanese than Taiwanese, from what I know, but still very tasty.

Fish or meat balls or barbecued meat on a stick are other classics that are sold at the street markets – we did not try those, but we’ve had similar street snacks on the streets of Hong Kong before.

Finally, a picture showing some fatty sausages just waiting to be cut and served. Not the most healthy dish in the world, but very yummy. Pork sausages with a sweet flavour, great on their own, but also nice with fried rice – funnily enough, back in Hong Kong I have a food stall just on the ground floor of my office building that sells the rice with the sausages. So I don’t even have to travel to Taipei to enjoy them! The lady on the picture below roasts the sausages first before serving them. Nice!